Do you feel out of place in the world?

So different from others that it’s like you don’t belong? Do most people, places, things and events seem strangely alien to you? Are you alienated from almost everything – especially yourself?

If so, there’s a perfectly rational explanation:

YOU’RE AN ALIEN! AN EXTRATERRESTRIAL FROM ANOTHER PLANET!

Now, I don’t know which planet (or spacetime dimension) you’re originally from because

2) the possibilities are literally infinite.

But, what I do know is that, if you’re still reading this, YOU ARE DEFINITELY NOT FROM EARTH – and therefore an alien who doesn’t belong on this planet! 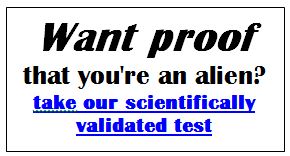 So now you know – the question isn’t whether you are an alien, but:

What are you going to DO about it?

I’ll tell you what. You’re going to contact TranSapient, Inc. – right NOW – so you can leave Earth and get back to your homeworld. Where you belong – in your native spacetime, happy and healthy with your own kind!

Because that’s what TranSapient does: we get lost aliens home!

You can’t afford to waste another nanosecond of your precious finite existence stuck on this Godforsaken hellhole. Seriously: Earth is on the verge of widespread chaos, destruction and apocalypse! On every level. Human, animal, vegetable and mineral. Mental, emotional, physical and spiritual. Plus, as an alien that evolution didn’t design to live on Earth, you’re at especially high risk – breathing toxic air, eating poisoned food and absorbing unnaturally high levels of background radiation. Thanks, stupid humans!

The good news is, you are insanely lucky to be reading this interstellar advertisement that

1) proves you are an alien

What are the chances of you (out of all the billions of people on Planet Earth) coming across this online ad (of all the countless ads on the planet)? Literally astronomical. Yet those chances happened – to you!

But you are also lucky in a far more important sense, because now you can choose a better future – one that doesn’t end with you dying soon on a rapidly dying planet.

Now do you want out? OK, then – contact TranSapient!

Because you have no choice.

Aside from imminent death.